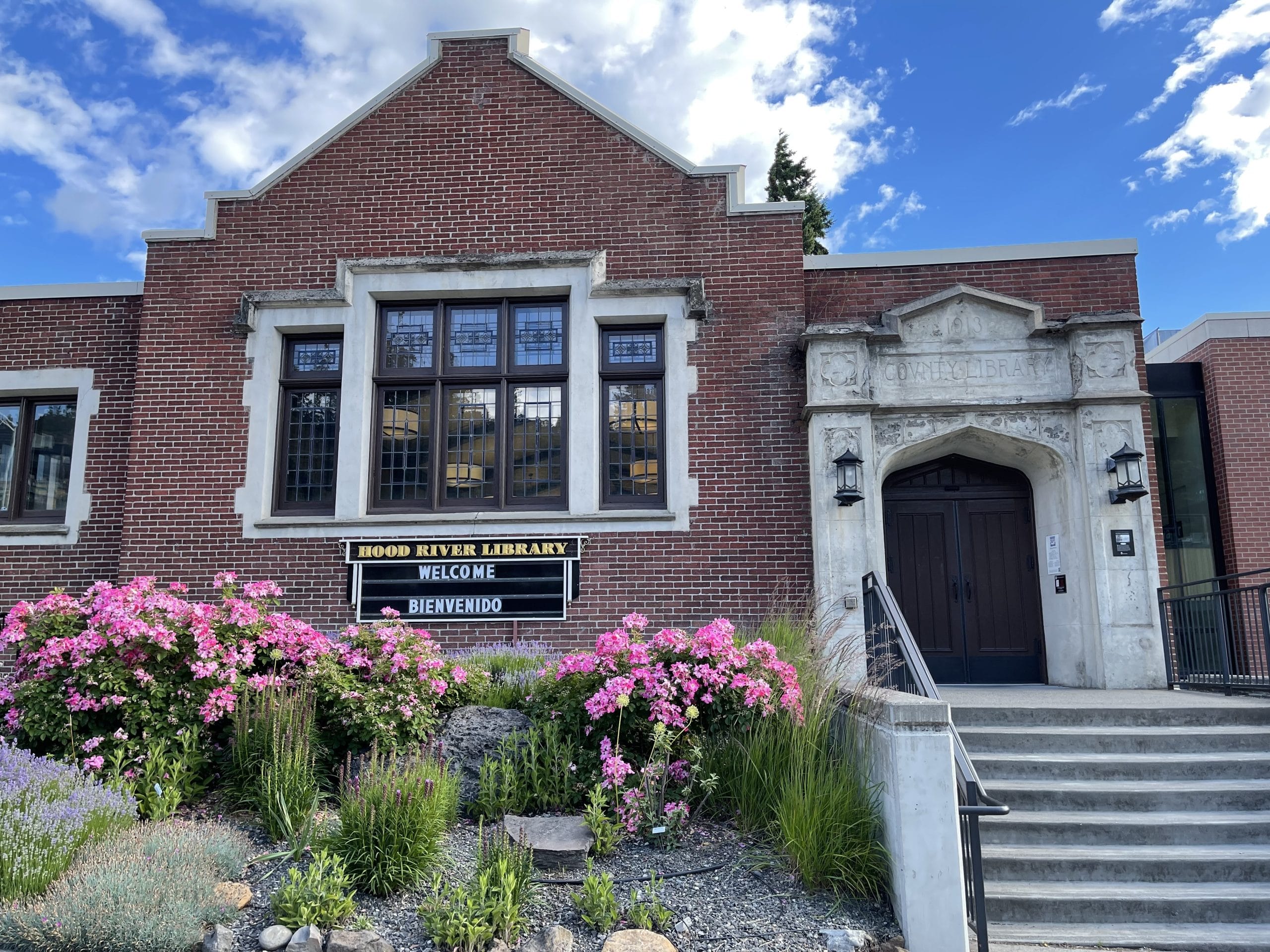 Our library district is a proud member of these organizations:

In 1876, Ezra and Georgiana Smith arrived in Hood River by steamer, which off-loaded them on a sandbar in the Columbia River. With them were their five daughters (ages 12 to 3), a piano, and five crates of prized chickens. The Smiths were among the original fifteen settling families and in 1886 built Hood River’s first big house, at the corner of 6th and State St. This house, is owned by John and Charlene Stoltz, is presently the site of the Every Thread Counts and other businesses.

Georgiana Smith was one of Hood River’s first Library supporters. Mrs. Smith, who died in 1911, worked to make sure that the Hood River County Library was a functioning community resource long before the Carnegie Library building was built in 1913.

Before the Carnegie building, the Library was housed in downtown business space owned by the Smiths. By 1913, Hood River County Library system had established branches in Parkdale, Odell, Dee, and Cascade Locks. Several of Georgiana Smith’s daughters as members of the Hood River Women’s Club continued their mother’s work on behalf of the Library when that organization applied to the Carnegie Foundation for funds to build the Carnegie Library.

At the 1913 dedication of the Carnegie building, the principal speaker, Hood River’s grand old man, Ezra Smith recalled his wife Georgiana selling ice cream from a wagon in the 1880s at a Fourth of July Celebration. “She was not doing this for her own gain, as many thought, but because she was determined to accumulate a fund for establishing a reading room and library in this County. I am glad that the Library is being built upon this ground, which has in a way been consecrated by her life to such a purpose, and I hope that someday the city may acquire the rest of the block and make a … park.” Ezra Smith died in 1921. In 1935, the Smith daughters honored their father’s wish by deeding to the County the land surrounding their parents’ home for a park named for their mother.

In 1999, John and Charlene Stoltz gave to the Library Foundation the lot at the corner of 6th and Oak St. for inclusion in the Gardens. Originally, this lot was part of the parcel given by the Smith heirs to the County. The Hood River County Library Foundation raised $250,000 to renew the Gardens. The present Gardens was dedicated in October 2005. 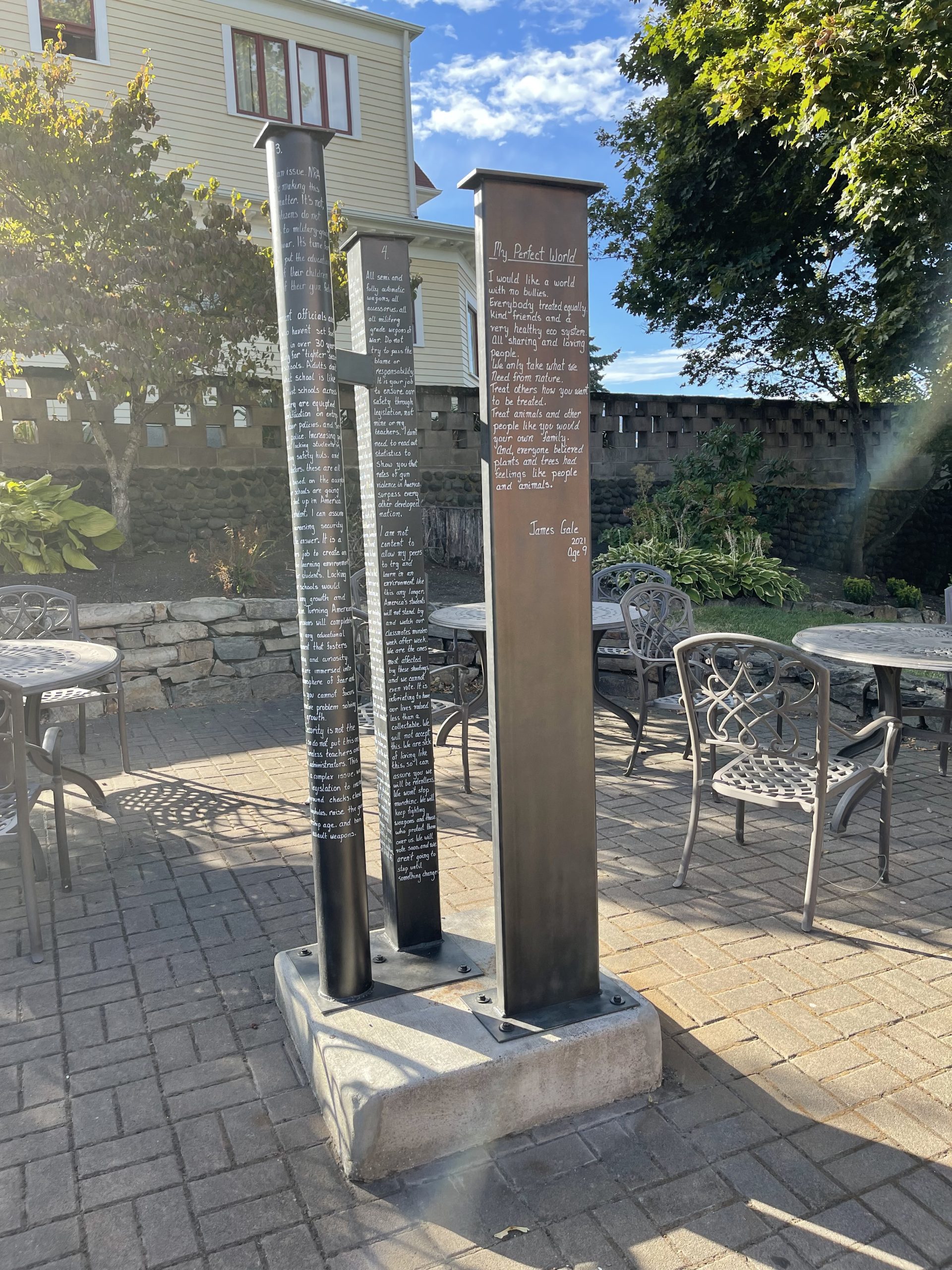 Public art creates and enhances neighborhood and community identity. It enhances the visual landscape and character of the city. It turns ordinary spaces into community landmarks and promotes community dialogue and, most importantly, it is accessible to everyone.Big Art, Hood River.
Artist: MacRae Wylde. Sponsored by Hood River Taqueria. Duration: 2 years (April 2021 through April 2023) 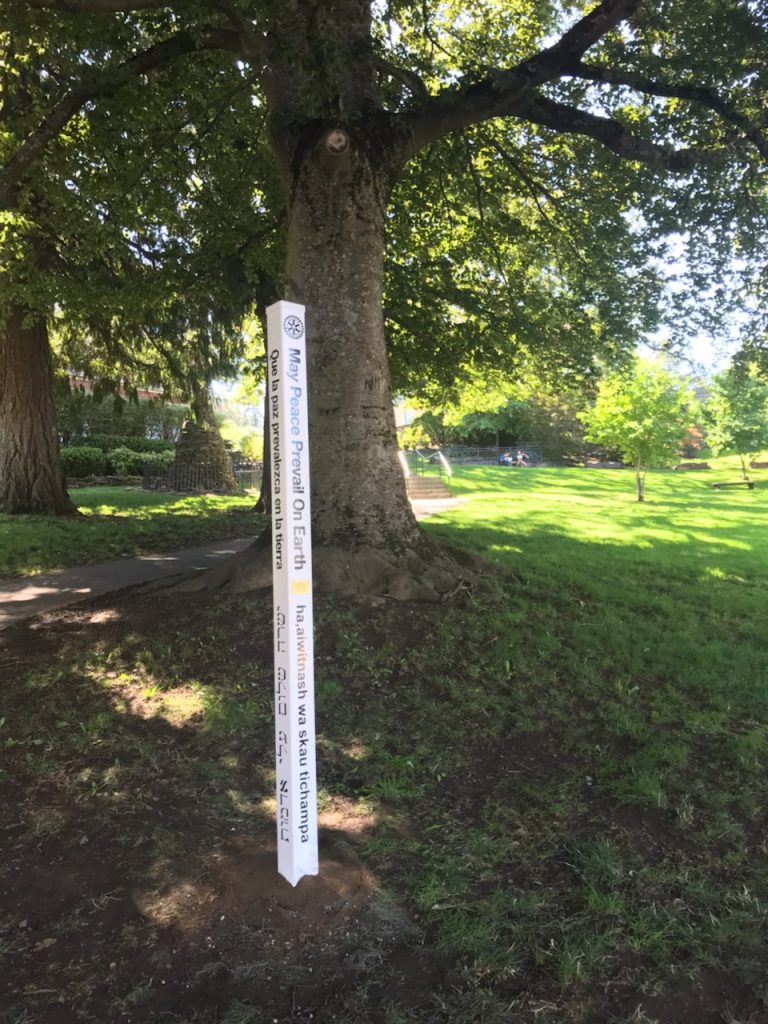 Currently the Hood River Rotary has installed Peace Poles at the entrance to Jackson Park, at the entrance to the new Children’s Playground, and at the start of the walkway between the Event Site and the former Nichols Boat Basin. 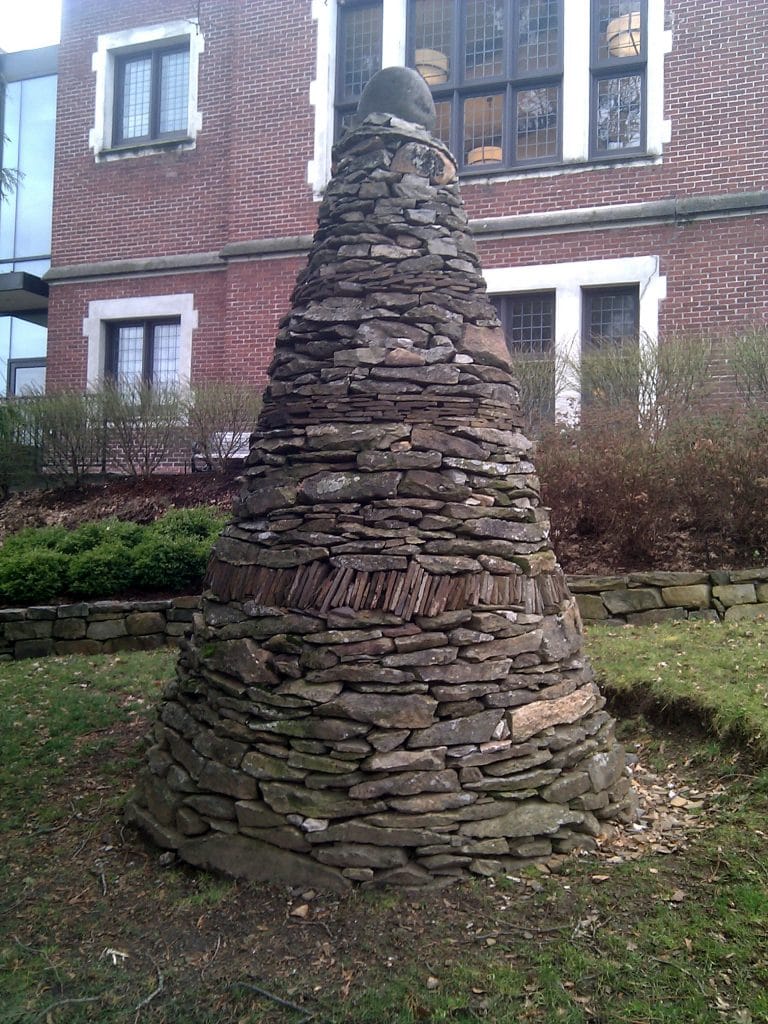 The cairn-style sculpture is constructed without mortar and is an example of the ancient building practice of dry stacked stone. This piece was built as gift to the community of Hood River as well as an on site demonstration project by the attendees of the Stone Foundation’s annual international 2006 Stone Symposium held in Hood River 9/29 –10/1, 2006. www.stonefoundation.org The chief stonemason John Shaw-Rimmington of Port Hope, Ontario was the President of the Dry Stone Wall Association of Canada www.dswac.ca, the group responsible for the project. 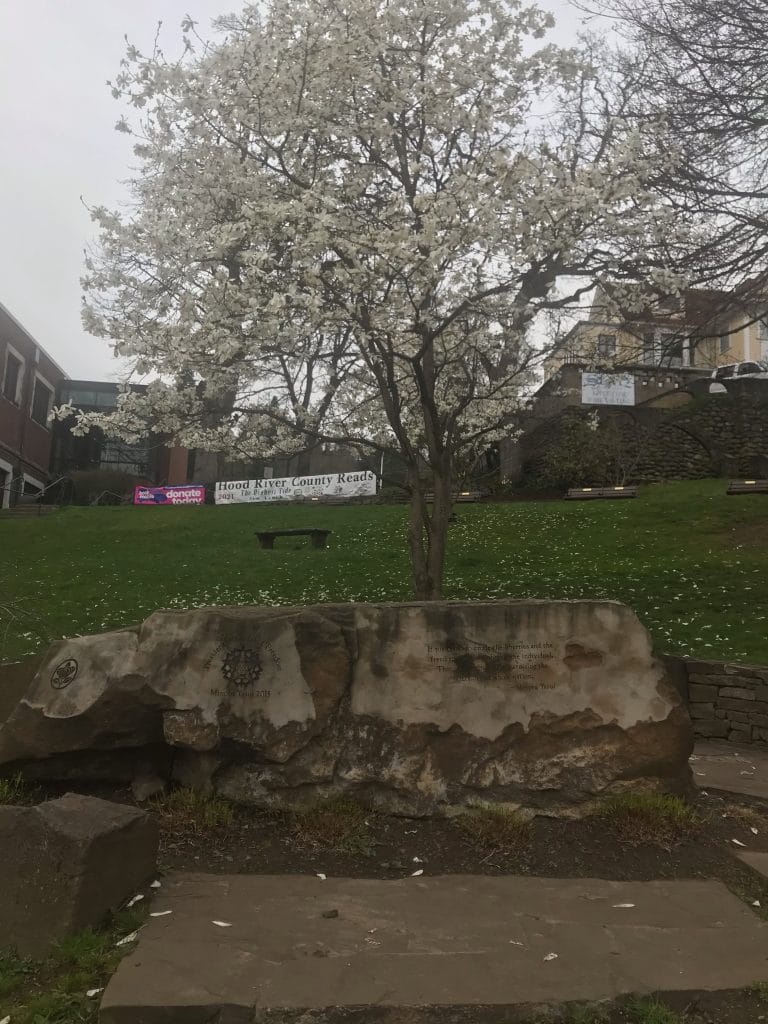 This stone honors the life work of Minoru Yasui.

Minoru (Min) Yasui, son of Japanese immigrant parents, was born in 1916 and raised in the farming community of Hood River. He was the first Japanese American attorney in Oregon, and during World War II, he initiated the first legal test challenging the forced removal from the West Coast and subsequent incarceration of over 120,000 persons of Japanese ancestry in U.S. concentration camps. He spent nine months in solitary confinement awaiting his appeal to the U.S. Supreme Court.

Yasui was the first and, to date, the only Oregonian to receive the Medal of Freedom, the highest civilian honor in the country. In 2016, Yasui’s centennial (he was born in 1916), the Oregon state legislature unanimously passed a resolution designating March 28 as Minoru Yasui Day in perpetuity.

The Hood River Library children’s library has many beautiful murals by Artist Mark Nilsson. The murals represent the Hood River Valley throughout the seasons. They were created in 2016 and funded by the Library Foundation. 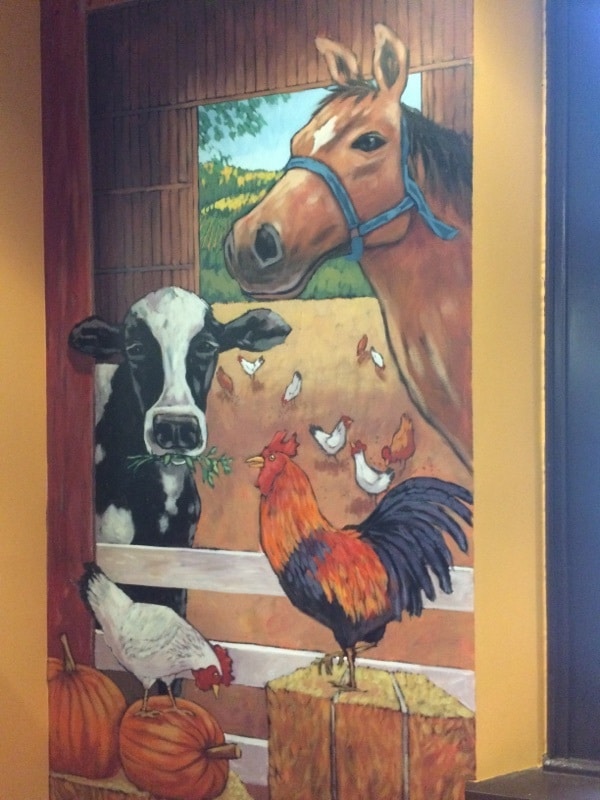 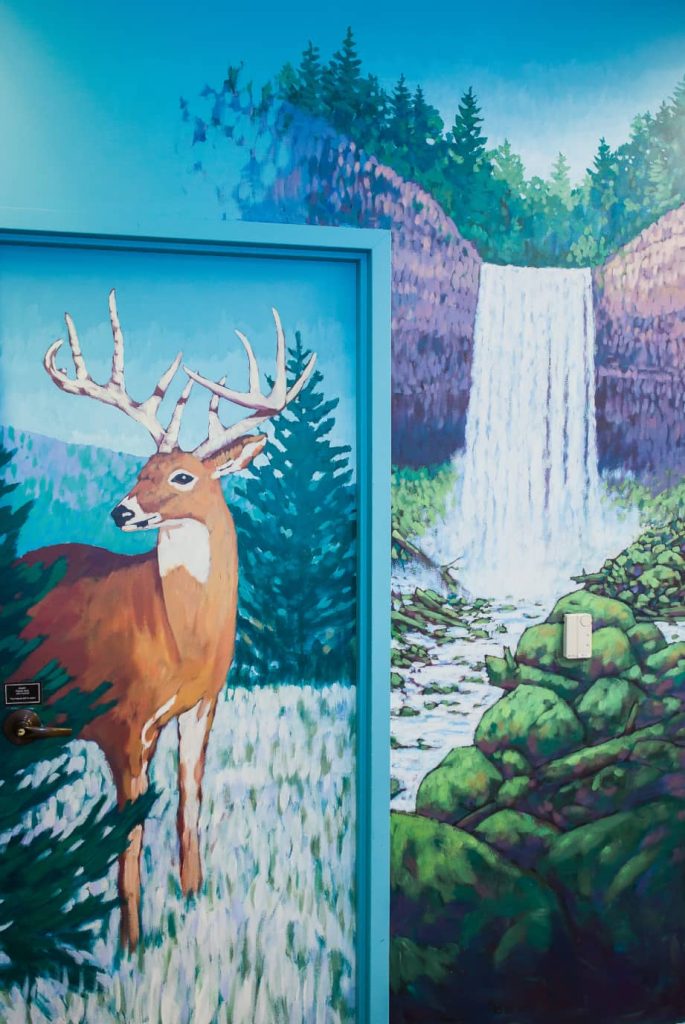 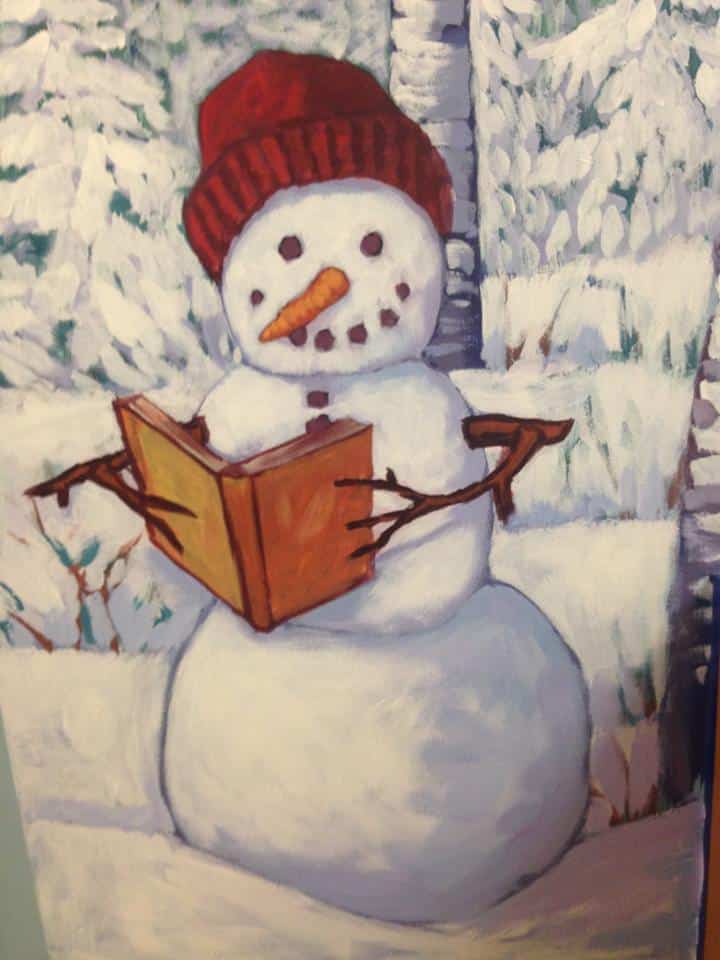 Search for a title

Get a library card

Services for the blind & disabled